In the Batman titles, mainly spinning out of the weekly Batman: Eternal, Bruce Wayne just recently lost everything. Gotham City has seized his assets leaving him broke, living and working out of a Batbunker while Wayne Manor is being converted into the new Arkham.  His equipment cached away all over Gotham has been discovered, confiscated, and dispensed amongst the Gotham criminals.  Things are looking grim for Batman, and he’s running on empty in every way imaginable.

In the Justice League titles, Lex Luthor has Joined the Justice League, and provided them with a brand new satellite headquarters.  On the civilian side, LexCorp and Wayne Enterprises have undergone a business merger and are collaborating on a number of projects.  Lex and Bruce are partners now, even though Bruce has only gone through with this partnership to keep a closer eye on Lex and to eventually double-cross him in the name of good.  Of course Lex is probably planning to do the same exact thing, in the name of awesome. 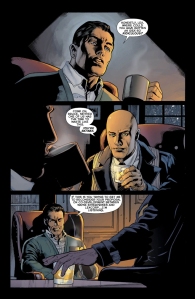 When will the continuity police catch up with these two chains of events and tie them together?

Think about it.  Their equal partnership is thrown severely off-balance.  Lex, who is fully aware of Bruce’s double-identity, will have two ways he can go with this.  Take the opportunity to end Batman, or to own Batman.  I think we both know which Lex will choose.  Bruce will be so desperate to save his city that he would accept Lex’s so-called benevolence and deal with the consequences later.  Bruce would insist on doing things his way, and of course Lex would agree to a silent partnership.  But we all know it’ll never stay like that.

Of course we the readers know that Bruce Wayne will eventually, somehow, get his billions back.  We don’t know how, but we can count on it.  What if Bruce somehow turns the tables on Lex and swipes his fortune, leaving him penniless and on the run from the law?  What if Bruce Wayne outvillains Lex Luthor?

The following is inspired by the works
of writer Bill Finger
and cartoonist Bob Kane.

Its the year 1919. The Constitution has just been amended for the eighteenth time. Prohibition. The Crime rate steadily begins to clime. In October someone manages to fix the World Series. A piece of America dies.
A little over a year later its opening night for The Mark Of Zorro. A ten-year-old boy is sitting in the crowded movie theater between his parents. Mom and Dad exchange glances at their little prince and smile at one another. The child stares fixated on the swashbuckling Douglas Fairbanks cloaked in black with a mask that hides his true identity.

Afterward as the theater clears Mom and Dad gather their coats and gently coax their awestruck son out of his chair. Outside he dances and twirls about, his arm extended and index finger pointing straight out as he waves his make believe cutlass in the cold night air. Arm in arm his parents walk steadily behind him trying to keep up with the energy that is their son. They kiss softly in the moonlight as the future of their great city gallivants a few steps ahead of them. In an uncertain world they all have each other.

“Bruce. Not so far.”, Dad calls out. The boy returns to his parents and takes a hand of each, swinging them merrily as they walk. His youthful excitement will run out soon. Its time to get him home. Dad knows a shortcut through the alley. Mom beckons him to stay on the street. But Thomas Wayne has lived in this city all his life, and he’s not afraid of shadows. The family continues on through a back alley.

The sudden shrill of a siren a couple blocks over causes alarm for a second. Bruce squeezes his father’s hand. Thomas squeezes back for a second and then looks down to assure his son everything is okay. When he looks back up something is moving closer toward them brandishing a revolver. The Waynes freeze. The streetlight beaming down over the man’s newsboy cap causes a shadow down his face. He sneers. Thomas Wayne’s hand tightens around his son’s as he steps forward. His other hand raises steadily as his wife’s trembling fingers slowly move to hand the man her purse. Police sirens scream through the streets again. For a second the goon is distracted. Thomas Wayne shoves his son behind himself and moves for the gun. BLAM! Martha Wayne screams as the gunshot echoes through the alley. BLAM! Bruce Wayne’s entire world collapses in front of him. A purse hits the pavement. The sound of heavy footsteps trails off in the night. Young Bruce Wayne sinks to the wet ground where he feels pain for the last time. 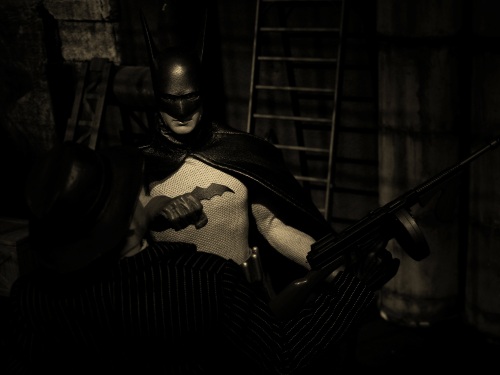 I’ve always had a fascination with the original Bat-Man design.  From the first time I saw it in a magazine I was drawn to it.  Its very different from every other version out there, and yet it bears all the same elements.  There’s a grittiness to it being a Pulp era detective, but it also draws on elements of the super hero.  I’ve wanted to bring it to life in my preferred medium for a long while now.  It was just a matter of how.
I knew right away that unlike Miller Bats from DKR I didn’t want something that was just a 3D realization of Kane’s drawing style. Oh I still wanted the costume in all its glory, but a realistic looking representation of his original duds.  But where to start?  Its not a costume that could be easily sourced from existing parts.  Or could it…

The suit was the hardest part to sort out, and it was also the most crucial.  It couldn’t have a nylon or spandex appearance to it.  That was much too modern.  So finding a proper bodysuit for this version was imperative. Then one night while surfing through the remnants of a 1/6 retailers latest parts breakdown I happened upon a white unitard from a Star Wars figure. What stood out to me immediately was the texture of it. It had a long johns vibe and was perfect for what I needed. A quick dye bath later and Bat’s had his costume.   The trunks are modified from a Barbie outfit and the emblem is scrap leather. 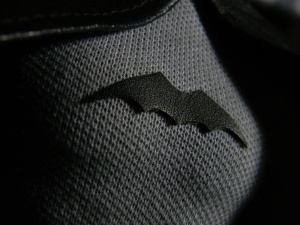 On the cover of Dectective Comics #27 the belt features a round disc that serves as the buckle. Its a one of the defining characteristics of the early design and will also set him that much further apart from other versions I intend to do. The buckle itself is a medium-sized button with a small bead in the center. The capsules are styrene rods. As for the color of the belt yellow was immediately ruled out. It didn’t work. Not for this version at least. Gold is much more subtle to eye here. In my mind its a leather weight belt he’s converted and lined with smoke capsules. Afterall this isn’t a gadget-heavy Batman.  He’s more Sherlock Homes and less James Bond. 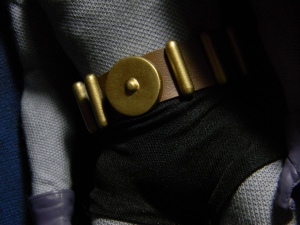 The gloves were a sort of happy accident. I’d purchased a set of hands belonging to a Captain America figure and with them came a pair of gripping hands perfect for holding a shield…. or a cape. The Cap hands came intended for an additional gauntlet piece so I added cuffs to them from another set of gloves. The boots were similarly altered and extended to have long sharp points over the knees.

The cape was the one piece that was already in place as I’d been holding onto it for years. It comes from the same DC Direct 13” Batman that most of Miller Bats’ parts are from. The only thing I did was paint the inside of his wings blue. The cowl was a much different story. There were several iterations to say the least. At first it started out with a very sinister brow and long pointed beak of a nose. And while I dug that for a bit it was much more Brian Bolland, and not at all what I was going for. So off went the nose and down went the brow until the whole cowl was softer and less defined. After I was happy with the sculpt the whole thing was textured to resemble the leather of the cape.