The Batmobile That Wasn’t: A Frank Robbins Tribute

My favorite BATMAN comics are from the Seventies.

After the TV show featuring Adam West ended, DC COMICS decided to do away with anything that could possibly be associated with it’s “camp” humor:  Robin the Boy Wonder graduated and went off to college, Batman shut down the Batcave and Wayne Manor and  moved into downtown Gotham, and Bruce Wayne became a social activist.  Batman was more involved in mysteries and usually operated only in night-time stories.

They put the Batmobile in storage.

The chief architect of this approach was writer Frank Robbins.  Mr. Robbins was also an accomplished illustrator, but drew only a handful of Batman stories.  In one of them, “Forecast for tonight… Murder!” (DETECTIVE COMICS #420, November, 1971), we get a *glimmer* of a new Batmobile.  Enjoy the story here and them come back to talk about the car: For a year, Batman had been driving nondescript sports cars, so as to better operate undetected in Gotham.  Nonetheless, everyone was beginning to get a creative itch, and Mr. Robbins set that off in this story, where the sports car in question began to get some … details. 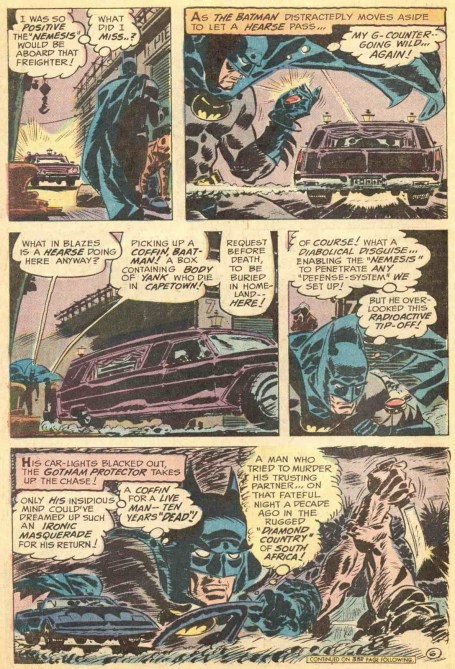 Yes: Mr. Robbins gave Batman a 1971 Ferrari 365 GTS, more affectionately known as a Daytona Spider.  By opting for the open Daytona, he renewed the trend started by artist Carmine Infantino back in 1964 to show Batman driving with his cape launched in the air behind him.  He also started the trend of the Seventies Batmobiles: stock sports cars with a hood decal.

I love it.  It only appeared in one panel, but it so reflects one man’s impression of the Batman mythos that I had to celebrate it in model form.  Enjoy! 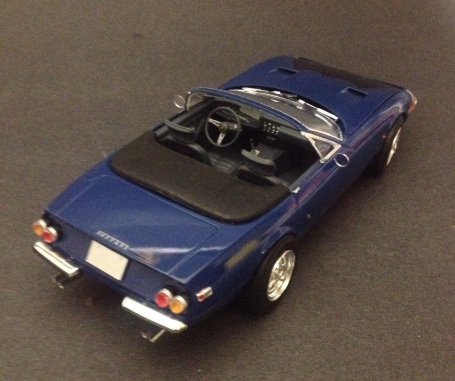 A Tumble(r) in the snow!

Here in Detroit Rock City, we have a bit of snow and some of the coldest temperatures in recorded history.  What to do with everything shut down and you can’t leave the house?

You crack open the model vault!

Japan’s Bandai Company is the world’s third largest toy manufacturer, second to MATTEL and HASBRO.  They also make some amazing model kits and, if you aren’t a model making enthusiast, you need to know that Japan takes model making very seriously.

With the advent of Chris Nolan’s BATMAN BEGINS, Bandai decided to release a series of Batmobile model kits from recent films.  First up was the Tumbler:

The best thing about this kit was how nothing looked like a Batmobile:

Nothing at all that resembles a car. More like an origami project!

The instructions called for a basic body color of Midnight Blue (85%)+ Blue (10%) + White (5%).  Scale model experts call for a small degree of white added to a color to add a sense of haze and distance into scale perspective.  I loaded up the airbrush and went for it.  Afterwards, I grabbed my copy of BATMOBILE: A Complete History, my gold and silver paint, and added in the details for this beast. 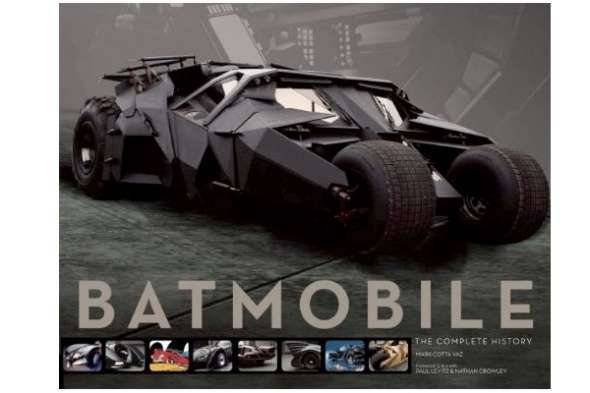 The kit is assembled around the cockpit out, starting with the front end: 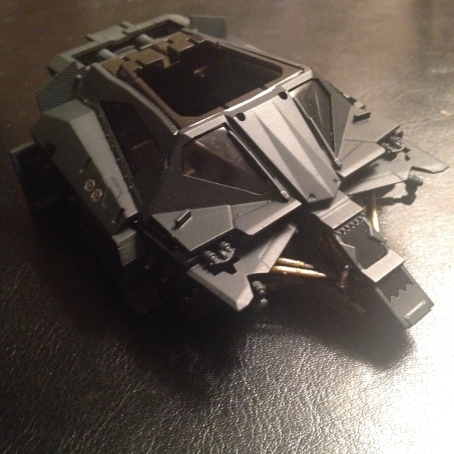 The parts were machined so tightly, I didn’t need glue until I applied the spoilers.

All in all, this kit took about an hour or so to make.  It turned out great! 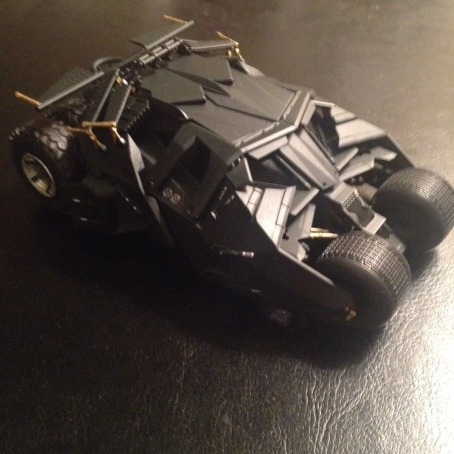 HOTWHEELS put out a Bat-Pod when they released several waves of Bat-vehicles a few years back.  It is *almost* large enough to fit 1/35, although it would need a good paint job:

Bandai also produced the Batmobiles from the 1989 film as well as BATMAN FOREVER.  Sadly, they didn’t have the rights to the 1966 car nor did they finish with the Batmobile from BATMAN AND ROBIN, which I actually love.  The Tumbler kit is well made, but very hard to find and very pricey ($150 USD these days).  An interesting advantage of 1/35 scale is that it is the preferred size for military enthusiasts, which means there are a lot of blown out buildings and street dioramas that would fit with this kit…

I had really feared this would be the only Tumbler model I would be able to get and wasn’t sure what I could do with the rest of my car collection being 1/24 scale.  Thankfully, an American company has come to the rescue with a HUGE (but affordable) 1/24 kit, with a bunch of cool add-ons.

Tune in next week:

When life gets tough, I find great joy in in the cellophane cover of cardboard and styrene.

LINDBERG is an American hold-out model company.  LINDBERG does quality work at a decent price.  They have a “no questions no problems” policy and will mail you more parts if you ask them for it.  It’s a shame, because the Japanese kick their ass with higher price point models that feature greater detail and precision in more exotic subject matter.  LINDBERG makes some off-beat subject matter, like this hot-rod Dodge A-100.  Thank god for them, ‘cuz there’s no other way to get this baby.

The Dodge A-100 was a source of inspiration for the So-Cal kustom car culture.  As the box indicates, a dragster version made the scene, so loved that HOTWHEELS even made one in 1/64 scale.  The Dodge A-100 was also America’s workhorse utility vehicle in the Sixties.  Me, I love that hot-mess front end design.

I crack the cellophane and go through a ritual I’ve known my entire life.  Engine block, rear axle, transmission, front suspension and axle, chassis, and wheels.  It’s a nice v-8 and everything glides together in a flurry of paint trays full of parts.  I add the floor panels and prep the front seat and dash.  $25 later for this:

I don’t want a hot rod, I want a ding-dong Dodge A-100, so I get on the yammer and get the JIMMY FLINTSTONE STUDIOS.  These guys are model car nuts who have a big fricking swimming pool full of resin.  The lovable perverts sculpted and casted the un-touched, kustom free Dodge A-100 body.  $25 more dollars and it arrived in glorious beauty:

Resin models arrive with all open areas completely covered in resin.  It’s the way these guys work their dining room casting machines.  I’ve started cutting out the windows.  I still need to cut the headlights and grille and then sand the edges.  That’s a small bother, because these guys cast a perfect body: no bubbles, no flaws, no screwin’ around.  Clean up those windows and boom: I’m a Dodge A-100.

So here we have it:
A Mid-Sixties Dodge A-100, baby-blue utility truck, with Gotham City license plates, dated 1966.

As for GOTHAM CITY 14 MILES, my pal Joe and a bunch of like-minded guys lead by editor Jim Beard decided that a life-long affection for William Dozer’s BATMAN TV show was worth creating a collection of critical essays about the show and it’s influences.  They got it published by Sequart:

If you are loving your latest BATMAN ARKHAM video game, I’m thrilled.  Did that Heath Ledger Joker just about make your day?  Awesome.  Are you ready to riot over Ben Affleck’s casting?  Don’t get your Bat-Panties in a twist.

Me, I go to the absurdity and brilliance of 1966 BATMAN.  The humor, color, and outright artistic inanity of it makes me smile broadly.   Batman and Robin use their atomic-powered Batmobile to jet around Gotham City and fight crime.  When they make a wrong turn and have to bolt back to Commissioner Gordon, they employ the Batmobile Emergency Turn Parachutes and pull a hard 180 turn.

Now, rather than leave those 10′ dragster parachutes lying in the middle of a busy Gotham street, Robin calmly picks up the bat phone and dials – who else, but:

The show producers used their great Hollywood 20th Century Fox studio resources to make the show happen.  That means a ton of cobbling of sets, locations, and props.  One prop was the beloved Dodge A-100.  It was the go-to henchmen vehicle for the show.  IF they had ONE, it was probably repainted and fitted with a new sign every other time you looked at it.

Here’s a great compilation from the 1966BATMAN website, by A. Pennyworth, to prove my point:

I love this show.  LOVE it.  It makes me happy every time I watch it.  That’s something to be thankful for.

PS- If the $50+ price tag is too steep, you can find a pretty decent A-100 HOTWHEELS that will work too.