For Neil: Duo Damsel (and friend)

HER: “Haven’t you already made one that was orange and purple?” 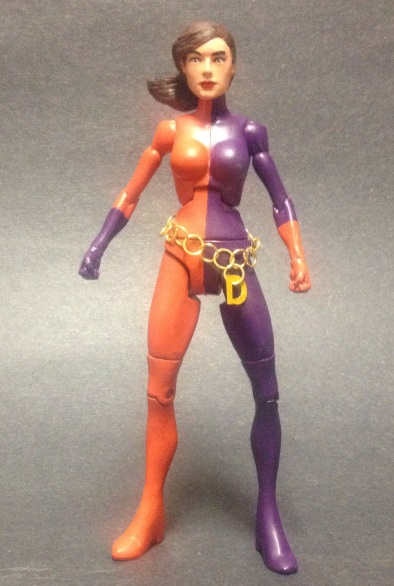 Duo Damsel, who could split herself into twins, fell in love with Bouncing Boy, who could… bounce.  I think some people might not have seen the chemistry, but the happy couple (trio) didn’t care.  Super Heroes get married.

As much as I can do, I don’t really paint with a brush. In fact, I try to avoid it at all costs.  Neil, wisely, contacted my dear friend Rod, who is brilliant with a brush and produced a wonderful Bouncing Boy, which he debuted at Fwoosh.com:

Rod does wonderful work and it really shows here!

We have a 3-pack of Legionnaires to ship off to Neil for his enjoyment.  We hope he likes them as much as we do.  We’ll take a brief break to enjoy Spring before for the next installment of our Dream 12 Pack. 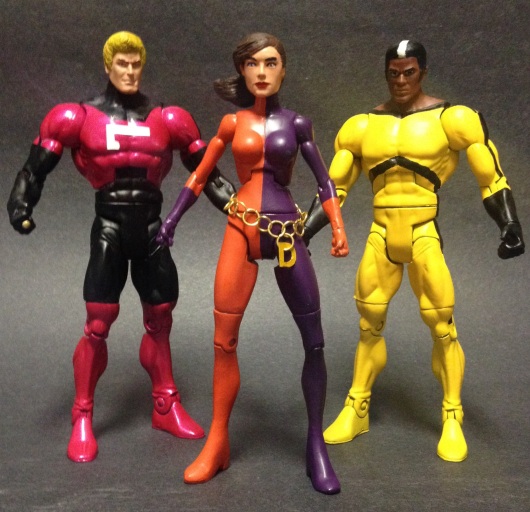 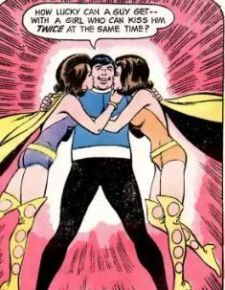 Playing Santa: JOY TO THE WORLD!

In our final PLAYING SANTA installment, Deane and Rod Keith treat themselves to a little holiday cheer.

Rod Keith: Right!  It’s hard to imagine that Doc Magnus, creator of the Metal Men, wasn’t included as a figure.  Doc is a no-brainer, and even Toyguru has said that the Metal Men (like the Doom Patrol’s Chief) is incomplete without their leader. How hard would it have been to include him in the sub?

Deane: As the Ghost of MATTEL Subscriptions Past, I would say it was the cost of a new head sculpt.

Rod Keith: Alright, so here is my holiday gift to myself:

Rod Keith: Doc’s body is just a simple Black Mask suit buck (which is different than every other jacket we’ve had so far, btw). I trimmed off the clasp that holds the coat together, repainted the shirt and tie, and obviously the jacket. Oh, that tweed!  Hands are from a MM Harvey Dent.

Deane: I’m so happy not to be seeing Aquaman’s or Superman’s noggin.

Rod Keith: Yes, Mr. Grinch: the head is from Matter Eater Lad, which I recognized at once, with that lop-sided smirk, that the crooked mouth might look okay with a pipe. It involved re-working the bulged-out cheek, and re-styling the hair. But, hey Mattel, it’s a suit buck, a pipe and a new head. It’s not like you have to build a sentient, elastic robot with responsometers or anything.

Rod Keith: As for the pipe, I was having trouble finding something that would work, but I just happened by pure chance to stumble upon a leftover from someone’s custom Minimate pile, a half-finished spider thing, of which the leg was part toothpick. I pulled it out, re-shaped the putty ‘joint’ into the bowl of the pipe. Lucky. I’m sure there are 1:12 dollhouse size pipes out there though.

Deane:  For my Doc Magnus, I set my way-back machine to the DC Direct Metal Men PVC Set.  A set so massive I had to take two pictures:

Rod Keith: But those figures are 8 cm high.  What good is that going to do you?

Deane:  A-ha!  I used the remaining growing resin from our Chief project and enlarged the Doc Magnus head to match the scale of a MATTEL Black Mask figure: 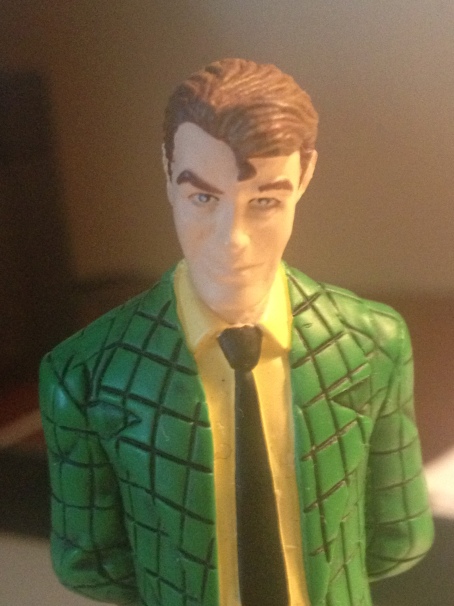 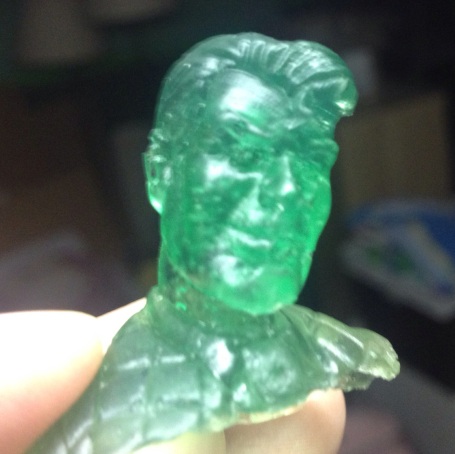 I ground the Black Mask neck down to the shirt collar and there you have it: A novel Doc Magnus head sculpt!  I decided to go for Doc’s other tweed jacket, the mustard-yellow with diagonal checker tweed.  Oh, that tweed! 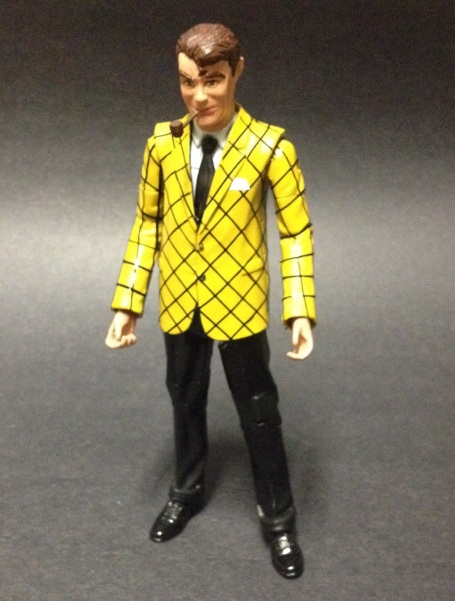 Rod Keith: You are an insane genius!
Deane: I take my METAL MEN very seriously.
Rod Keith: Wait, that’s not paint…
Deane: No, it’s automotive pinstripe tape.
Rod Keith: What in the …
Deane: You know how much I hate paint brushes: I used tape to make that jacket.  And I will never make another one again.
Rod Keith: What’s that, Ebenezer?
Deane: That jacket was the worst thing I have ever done and I shall never make another.  Humbug, I say!
Rod Keith: Almost forgot! Had to drill a little hole in Doc’s face to fit in the pipe. I’ve left it loose so it can come out and not snap if the custom ever topples.  And if anyone wants to know what Doc looks like without:

Deane: My pipe is 1mm metal wire and a chunk of plastic sprue from a model car kit.

Rod Keith: Erm.  There’s some figures missing in your picture.

Deane: No there aren’t: I’ve simply removed the figures that MATTEL made flawed.

Deane: Nonsense.  Lead was never depicted as towering over his friends; Lead was portly.  Also, Tin was never as diminutive as MATTEL sculpted him.  I stand with the original classics.  I need to make THREE MORE METAL MEN: 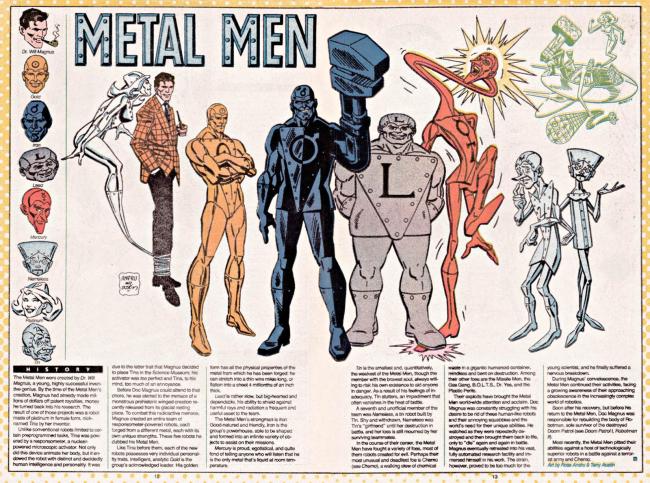 Rod Keith: There’s no helping you.

Deane: Happy New Year, and may all your metals be bright! 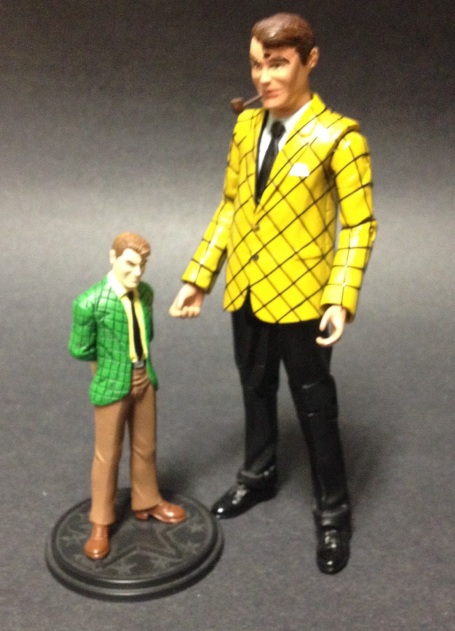 A special METAL MEN salute to Anthony Clark for the use of his PVC figure!

Atomic Two on One: Hail to the Chief!

In our final installment, Deane and Rod Keith describe the mammoth task of creating the Doom Patrol founder, The Chief!

Rod Keith: Deane, how many DOOM PATROL action figures are on your shelf?

Rod Keith: Correct!  And Deane, how many members of the Doom Patrol are there?

Deane: …I would say…

Rod Keith: Exactly, my dear Otis.  In our last Atomic Two on One, we solved MATTEL’s problem of the missing Doom Patrol adoptee, Beast Boy.  Today, we join forces to produce the genius leader of the Patrol, Nile Caulder: The Chief!

Deane: The Chief was the founder of the team: he created the robotic body that saved the dying Cliff Steele, he invented the bandages that contained pilot Larry Trainor’s Negative Man energy, and he coaxed Rita Farr out of reclusiveness to become Elasti-Girl.  Without The Chief, there is no Doom Patrol.

Rod Keith: There are numerous do-it-yourself online solutions to The Chief.  Most of them boil down to one of two options:

Problem: The body is waaay t0o small in scale and the wheelchair is forty years too advanced.

Problem: The body is way too big in scale for the Doom Patrol.

Deane: Now, the MATTEL DCUC suit buck fits the JAKKS wheelchair very nicely.  The Chief wore a single-breasted suit, ruling out Clark Kent and the Sandman.  Black Mask, however, would be perfect.  You can easily remove the joystick from the wheelchair arm for the correct mid-Sixties look.  But the Fisto head…

Deane: So we quit?

Rod Keith: So we do NOT quit, we cross the border, conceive a plan over fish tacos and mojitos, and resin.

Rod Keith: We then used a reactive resin, such that it would expand uniformly when placed in water.  Using Deane’s mold, we then cast a Fisto head with this reactive resin.  Two days of swimming in the Detroit River later and:

Rod Keith: I want to eat that.

Deane: With the oversized head, we could play around with a second kind of reactive resin, one that shrank.  We cast a mold of the Gummi Chief head and tested several different doses of the shrinking resin in order to get the scale just right:

Rod Keith: To cover the costs of the silicon and reactive resin, we took donations from 23 of our closest internet friends.  A 24th friend then offered to paint the heads, if so desired.

Deane: It took some time to get them all casted, but we did it:

Rod Keith: And off they went to the paint shop!

Deane: All in all, this was a wildly successful first go at this kind of nonsense.  Importantly, it can’t be stated enough that this project was only possible because of all the people who supported it happening.

Deane: We were very happy to see some pictures of people’s completed Doom Patrols:

Deane: That’s not the Chief head we just burnt my fingertips to make!

Rod Keith: I know.  I wanted to show people who didn’t get our head that they could still make The Chief.

Deane: Ohmygod… I just… Ugh.  So, here’s to the Doom Patrol: 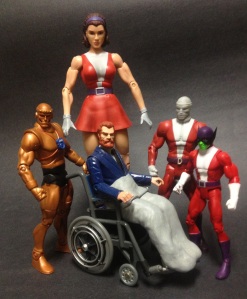 Deane: A-ha!  See, I don’t think Mento was ever a part of the team.  I think they liked keeping him out to make him miserable, so that’s why I don’t have his figure in the picture.

Rod Keith: That’s the most blatant attempt to cover up not finishing a job I’ve ever heard.

Deane: Believe what you want: Mento isn’t on the team.  Quite frankly, I think we should discuss which DC teams need our help the most, filling in the blanks that MATTEL left.

Deane: No, like Sandy Hawkins, Rick Tyler, and Jakeem Thunder.