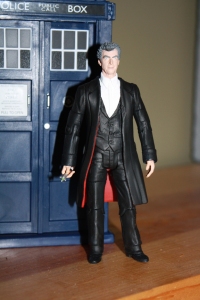 It’s not easy being a Doctor Who toy collector.

Way back in the 1990’s/2000’s, a model train company named Dapol decided to go out on a limb and venture into the action figure business, creating the first line of Doctor Who action figures.  They weren’t available in the US, so I had to resort to this website called Ebay where you could buy all sorts of stuff.  This was back before Paypal existed, so I was regularly buying international money orders and sending them to England.  I finally got to the point where I was buying figures directly from Dapol.  They even sent me a Christmas card.  When the time came that Dapol lost the license to the Doctor Who toyline, they sent me an email telling me all about it.  Dapol was my penpal.

Years later, Underground Toys began making a 5″ scale line of figures based on the new series.  They threw a bone to old school fans and also created a Classic line based on the original series.  The quality of these figures has been amazing.  Honestly a dream come true for any life-long Doctor Who fan. 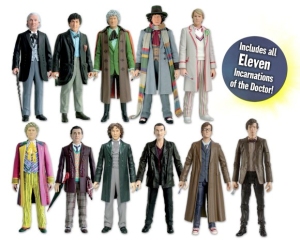 Underground Toys made a bonehead move and switched the scale from 5″ to the more kid friendly pocket-sized 3-3/4″ scale.  And they did so right before Peter Capaldi made his debut as the 12th incarnation of the Doctor.  They claim to have ceased production of figures at a 5″ scale…  except…

Underground Toys has developed a very interesting method of engaging fans for their opinion.  It’s sort of a defensive posture.  They make an announcement that a particular item will never be produced.  Then if the wailing of the fans reaches a particular pitch, the fans are rewarded with the production of that product.  Seriously; I’m not exaggerating.  Just ask any of my fellow wailing collectors who were told we’d never, ever get a 5″ 12th Doctor figure, who allegedly will be ready for retail in Septemberish.

I decided not to wait.  After a fair amount of wailing, they released a 5″ 11th/12th regeneration figure set, which included the 11th Doctor in his purple Victorian style outfit with 12’s head included.  12’s outfit is not only simple in design, but also very traditional and back-to-basics.

It was easy to customize a 6th Doctor/Colin Baker figure into the 12th Doctor.  No, seriously… it was.  While 6th’s costume is an eye-bleeding embarrassment of shark-jumping proportions, it’s really just offensive in color.

Ironically, the spare 6th figure I had to use turned out to be a blue variant from a comic book appearance.  Painting it black with a red liner was all it took.  I had to resculpt the collar, shirt and vest, lowering it a little.

I also gave the spare Capaldi head a tweak, un-arching his eyebrow for a more dignified look. 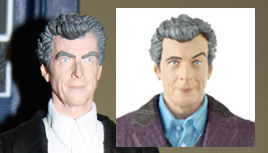 One response to “12th Doctor custom figure (Doctor Who)”