I’m going to tell you all about Christian Abshire.

My girlfriend Jeanie’s first child and only son, Christian, was born with a heart condition.  He was a normal kid, although he was exceptionally smart, talented and kind-hearted.  I’ve heard many stories about him in a number of situations, and it seems that the only time he ever got angry about anything was when he’d witness some sort of unfairness or wrong in the world.  He had an unbelievably positive attitude, rolling with the punches that life dealt him.  And oh boy, did life throw some punches at that poor kid.

I only met him once.  Years ago, I bumped into Jeanie and her kids at Wal-Mart.  While we talked, I couldn’t help but notice how tired her son looked.  It wasn’t long after that when he was checked into the hospital for his worsening heart condition.  Christian required a heart transplant, and was put on a waiting list.  They moved from Louisiana to Houston to be close to the hospital.  Jeanie and her girls lived with Christian in his hospital room for the next two years while he waited for a donor heart.  He was able to get out of the room occasionally, but those trips became less frequent as his condition grew worse.  He was hooked up to a number of tubes and wires, plugged into IVs and heart monitors.

While he was stuck in bed, one of his favorite things to keep him busy was building Lego sets.  Jeanie tried to keep him loaded with any and every set she could get.  His favorites were Star Wars.  Through a fusion of extreme boredom and extreme talent, Christian used the video camera on his cell phone to create a series of stop-motion movies with his Legos.  Bed-ridden and strapped to machines, this kid managed and maintained a very impressive You Tube account through his phone. 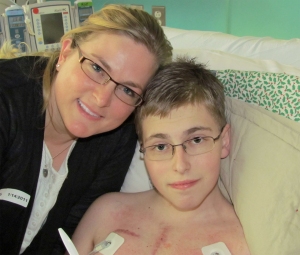 After two years of waiting, the heart never came.  They installed some sort of valve in his heart to help extend his life while he continued to wait.  This valve was contaminated with a fungus that spread through his body, wrecking his organs and causing brain-bleed.

It was a few weeks before Christmas.  He told his grandmother that he needed to be wheeled down to the gift shop so he could do some Christmas shopping for his mom and sisters.  She told him that there was plenty of time before Christmas and they could do his shopping later.  He started to get impatient as he explained that he wouldn’t be able to do it later.  His 17th birthday was approaching on December 21, and he casually commented that he wouldn’t live to see it.  Sure enough, on December 20, the day before his birthday, his reached the end of his hard-traveled road.

Sometime between Christmas and New Years, Jeanie and the girls returned to their long abandoned home in Sulphur.  I ran into them on January 2nd at a local restaurant.  I was aware of everything that they had been through thanks to Jeanie’s Facebook page.  I offered to help them fix up their house, and it pretty much instantly turned into something bigger than that for Jeanie and I.  I’d kind of been chasing her since high school, but the timing was always off.  Twenty years later, I guess the stars had finally aligned right.

I guess Christian’s positive attitude rubbed off on Jeanie and her girls.  There doesn’t go a day without some mention of him, but it’s always remembering a happy moment.  Something he used to do or say.  A practical joke he’d play on the nurses in the hospital.  A favorite food, or a food he couldn’t stand.  (Christian and I share the same sheer hatred of lettuce!)

I wish I could have had a chance to know him in person.  I know he would have dove head-first into my toy collection, becoming the unofficial curator of my collection room, and my partner in building custom figures.  I can only wonder what this kid could have done with some Milliput and an Exacto knife!

This Sunday would have been Christian’s 20th birthday.  To remember him, all his family will gather for a birthday party where we’ll release Chinese floating lanterns in his honor.  In my own special tribute, I’m posting links to his still-active You Tube account.  Please take a moment to watch and enjoy these with me.

2 responses to “Legos by Christian Abshire.”