I was having a discussion today about Facebook’s constant pushing and prodding to promote “business pages”, and it reminded me about a little known graphic design project/gag from a few years ago.

I used to be the creative director for BargainBee.com, a daily deal website just like Groupon. BargainBee is long gone now; bought out and merged and/or rebranded at least twice before being shut down completely. During our heyday, April Fool’s Day was coming up and I had to come up with something quick. I knew it had to be something funny enough to go viral and earn us enough followers to justify not making any monetary profit for a whole day. I started Googling random horse photos and Photoshopping wings onto them. That’s how “Mike’s Flying Ponies, Farm & Feed Store” came to be.

Why Mike’s? My boss’s name was Mike. He named almost all his businesses “Mike’s”. He had Mike’s Car Wash, and Mike’s Lube Shop. His business partner’s name was also Mike. I think it’s kind of like how Tony Danza’s characters are always named “Tony” so he’ll always know his queue.

I created a Facebook business page and started uploading the flying horse photos. I then created the BargainBee feature with a totally legit writeup and graphics. At the stroke of midnight, the deal was on!

By the time I arrived at work around 9 am, our message board was already buzzing with questions. That was when I started posting both on the BargainBee message board and Mike’s Facebook page as “Mike”, the owner.

“You say you haven’t gone for a ride on a flying pony since you were a kid? Dang! What are you waiting for? Go to http://www.bargainbee.com to check out our biggest discount ever!!!” 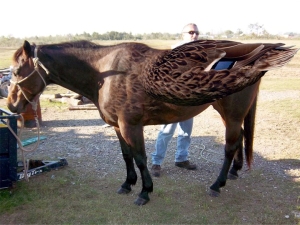 “We want to thank BargainBee.com for taking a chance on us, even after the incident. We assure you that all of our flying ponies are now equipped with GPS devices.” 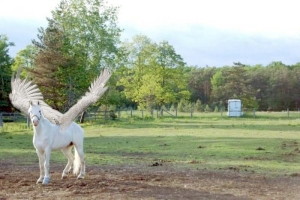 “Please note that helmets and harnesses have been declared mandatory since this photo was taken.” 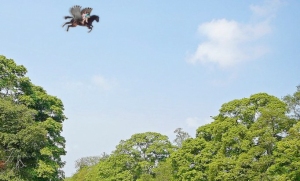 “We feed our ponies only the best reindeer feed shipped directly from the North Pole, with a much lower radiation count than our competitor’s.”

As you can imagine, being April 1st and all, 90% of everyone got it right away. They started sharing this deal with their friends on Facebook and beyond, and while I don’t have the numbers anymore, I do remember that we hit a record number of “likes” that day.

What about the other 10%? Yeah. Some people never get it. People would post on the message board, informing us that there is no such thing as a flying pony, and that they can’t believe a reputable business like BargainBee would feature such a company. Then I deleted their comment. Then they posted again saying their post was deleted unfairly, and they were never buying anything from our site again. I knew that by April 2nd they would either not be missed by us at all, or they’d look at the calendar and suddenly feel like a total doosh.

We had a person call our office to report that they believe that we’re featuring a fraudulent company, because their phone number, 337-555-5555, doesn’t work.

We had a well-known local photographer who was posting with sincere interest, wanting to know where the farm was so she could drive by and take a look. She wanted to find out if she could arrange to bring clients to take photos with the horses, and if the wings were painted on plywood and strapped on the horses, etc. She eventually called the office, angry in fact, about the way “Mike” has been evading her questions about their location, and about the fact that their 555-5555 phone number doesn’t work. She said, “It looks like somebody added duck wings in Photoshop. One of those horses distinctly has mallard wings!!!” We had to explain to her that today was April frickin’ Fool’s Day. Then she laughed and completely changed her tune. She continued to post on our message board all day, this time playing along with the joke.

I haven’t done anything with that Facebook page since that day, but maybe I will eventually, just to surprise all the people who are following it that totally forgot about it.  If you want to help motivate me, like this page!