Rocko: Chuckles wasn’t a Joe I was particularly interested in as a kid, because he came with a simple pistol and holster instead of the heavy machine guns or ninja swords that made a figure a must own.

Now, in no small part to the brilliantly written filecard by Larry Hama and the Mike Costa/Christos Gage IDW Cobra comics, Chuckles is a favorite. I really relate to this guy. We even have a similar fashion sense.

Go ahead and google “hole and corner,” and consider how few children in ’87 had any idea what the hell that was.

Xander: I dig Chuck now, but as a kid he was middle ground at best. I recall it came down to he and Falcon once at a Nickel &Dime. Falcon won out in droves.

It wasn’t until the Impel trading cards that turned me on to the comics, and the Special Mission series in particular, where Chuckles really shined.

Rocko: I remember that there was a kid in my third grade class who was just a little bit smarter than me, and always had ideas that were a bit better formed than mine. Now I wonder if he was just parroting something his older brother or someone said, because he was savvy as shit for a 7 year old. I remember that he didn’t like any of that ’87 class of Joes but Chuckles. When I said “He’s OK…but he just has a pistol.” The kid said “That’s why I like him.”

Xander: That’s pretty deep for 7. Really speaks volumes though. I imagine there were a lot of us who didn’t “get” Chuckles until much, much later. 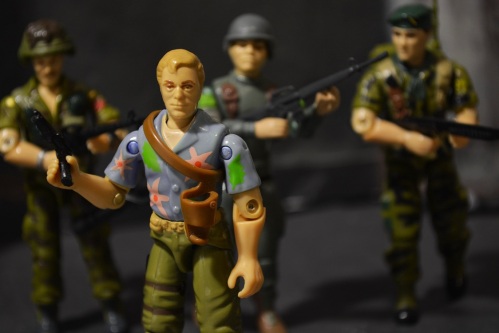 Rocko: Espionage related things did little for me as a kid. It was really the post 9/11 world that made me develop an interest in counter intelligence concepts. Which I think is true for a lot of people, given modern Bond, Bourne Identity, the Americans, Cobra…

Xander: Rocko, if you want to write a piece on Chuckles I’ll shoot the pictures.

Rocko: You got it! Give me a little time. Great idea.