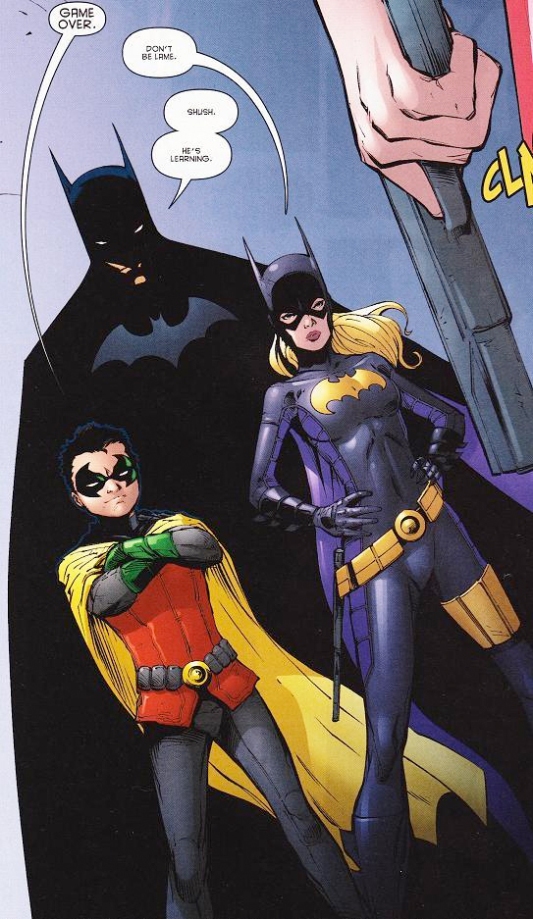 A meeting is called to order in the Justice League conference room.

WW: It’s about your… methods.

(There are a few uncomfortable glances.)

S: There isn’t an easy way to say this.  You have to stop dragging children into the line of fire.

S: You’ve been assembling an army of children.  Minors.  You’ve been making them prowl the streets and fight criminals.  Most of which are clinically insane.

WW: We overlooked the first one.  He was an exceptional case that was raised as an acrobat.  We never even noticed that the second one replaced him, until we figured out that the first one became Nightwing.  Then this second Robin turned up dead.

F: We’ve heard rumors that there was a young blonde girl acting as Robin for a short time, and that she died, too.  Can you confirm if this is true?

S: We are also aware of a red-haired Batgirl, and two more Robins.

WW: It’s safe to assume that this newest Robin is Damien Wayne, your long, lost son that just returned from boarding school, despite the fact that there is no record of his existence before last year.

S: Is it also true that he just recently died in battle?

S: Can you see why we have a problem with this?

WW: You wear black and grey.  They wear red and green, with a bright yellow cape.  It’s almost as if you’re using these “Robins” as decoys.

F: Is that your intent?

B: I don’t think this is any of your business.

S: We have a strict “no kill” policy in the JLA.

B: I don’t appreciate the implication.  All of you know I hold that standard in the highest esteem.  I’ve never killed anyone.

B: He was born into the League of Assassins.  He’s been trained to kill since birth.  Taking him into Gotham was the only way to give him an outlet; to put a muzzle on him.  To teach him restraint; not to kill.

S: Bruce?  No more children in the line of fire.  Don’t make us tell you again.

I’ve often wondered about sidekicks in comic books.  From a writer’s point of view, they allow escapism for young readers.  But from within the story, it’s actually kind of disturbing to think about.  Some sidekicks are nearly invulnerable like the Kryptonian Supergirl, or Superman’s clone, Superboy.  Wondergirl is an Amazon.  Aqualad is Atlantean.  Kid Flash has a dangerous power that he must be taught to harness and control.  Their strength and gifts make them the exception.  In fact, it might be the best way to teach them the responsibility to wield their power wisely.  But what about ordinary, mortal children, clad in brightly colored uniforms, leaping across rooftops while fighting super-powered madmen?

What is the point of the Justice League if they don’t hold their members accountable when their actions are questionable?  Have they never discussed how their darkest, broodiest, most unapproachable member surrounds himself with children and trains them to become vigilantes in the most crime-ridden city in the country?  What about when he loses one of them?  Or the next one?

Rick Veitch’s “Bratpack” mini-series (published by King Hell Press) is a parody of the Teen Titans.  This story addresses a fair share of disturbing situations that a so-called “sidekick” could find themselves in.  It’s disturbing, and a little schlocky, but I still consider it to be required reading for any mature comic book fan.

Please don’t get me wrong.  I’m a big fan of the Teen Titans, and Robin(s) in particular.  Tim Drake is a long-time favorite, and Damien Wayne is my favorite new character to debut in years.  The Batman titles are stronger books with them in it.  But don’t look at this as a reader.  Look at it from within the story.  It’s a little messed up.  And I can’t help but wonder why the Justice League has never called Batman out on it.