Flashback Friday! Vintage Star Wars: Still stuck on Astromechs after all these years

I had something completely different in mind for this week’s entry, but the sentimentality of my 40th birthday today (April 10th) got the better of me.  I felt like throwing you all some vintage Star Wars love, with a very special surprise at the end.

One of the cheapest (and yet most endearing) tricks Kenner pulled on us was their R2-D2 (and R5-D4) figure.  They skipped that complicated “sculpting” process and wrapped a sticker around a smooth, detail-free body.  Then I guess they felt a little guilty, so they threw the money they saved on sculpting into vac-metallized dome heads.  Even as a kid I knew this was a cheap stunt, but it didn’t make me play with my R2-D2 figure any less than the other central characters.  He still got brought outside with all the other figures, occasionally staying outside in the dirt overnight.  And no, the sticker didn’t take too well to that.  I’m sure that sticker was the bane of many moms who had to replace their kid’s R2-D2 figure.  Go to Ebay and do a search for “vintage R2-D2 figure” and you’ll see a wide variety of wear and tear.  I think you could probably rate a geek’s childhood on a level from “good” to “awesome” based on the condition of their vintage R2 figure.

A while back, I stumbled on a repro site that had downloads of all the vintage Star Wars cardboard backgrounds and decals.  Someone had recreated it with perfect detail in a vector program like Adobe Illustrator.  I downloaded the jpg and started to come up with ideas.  I made a negative image out of it, turning the sticker black with white lines, and the blue became red.  And that is how my vintage Imperial Astromech droids started to develop.

I searched on Ebay and purchased a lot that included a pile of R2-D2s and one R5-D4 for super-cheap, because their stickers were casualties of what appeared to be ‘epic playtime’.  I removed what was left of the stickers.  I picked an R2 with the least amount of chrome on his dome, and painted it and the R5 solid black.  On R2, I painted his colors in reverse to match the sticker; all red with a blue dot for his “nose”.  For R5, I painted his three eyes and the stripes down his legs fluorescent orange.  I printed the wraparound images on sticker paper, and laminated them with matte finish packing tape.  I cut them out and applied the stickers.  It was so easy, yet so rewarding!  These two really added some pop to my vintage Death Star playset. 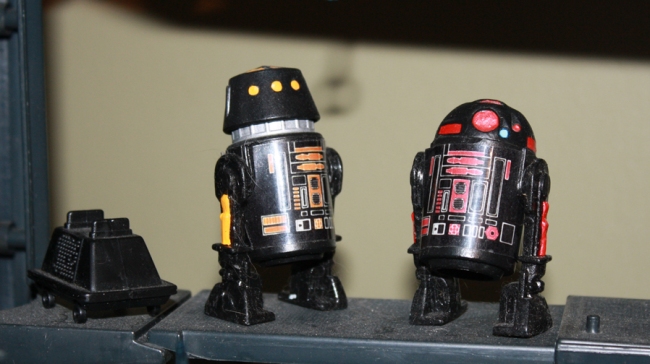 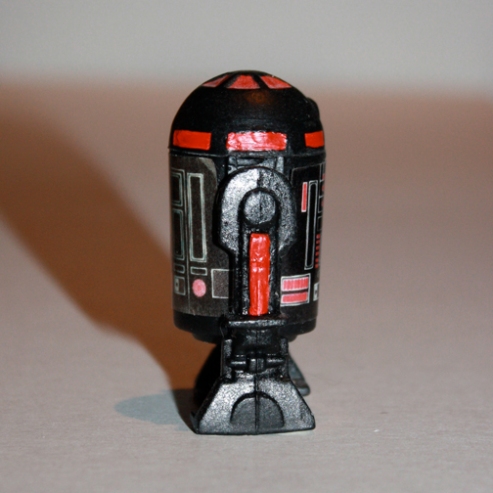 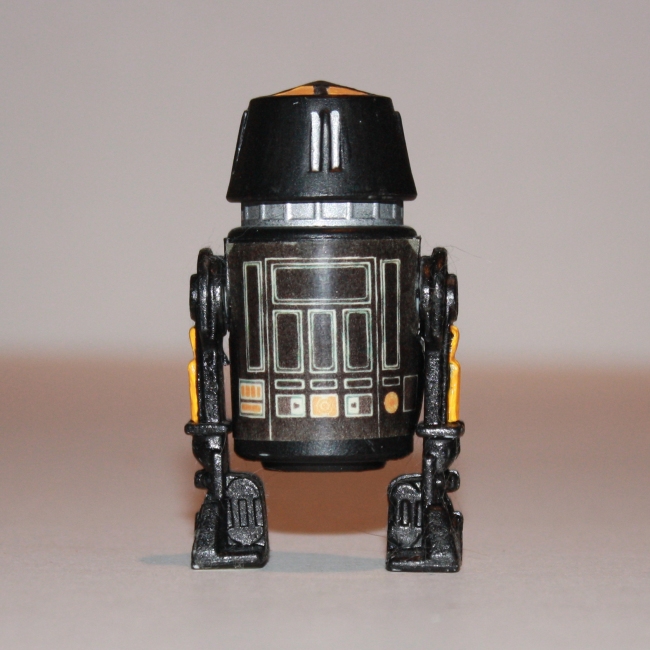 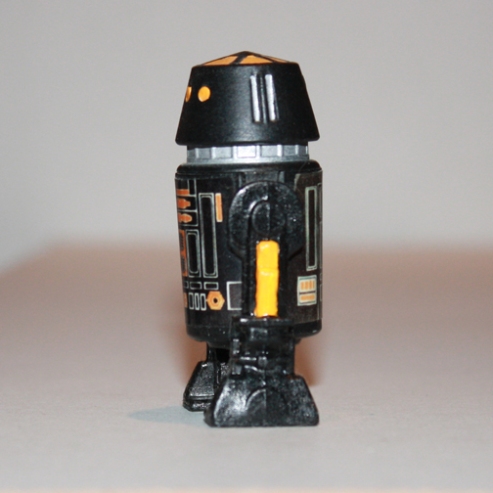 A few years later (also known as a month or two ago) I started getting into my vintage collection again.  During the time that I was customizing the vintage figures from a few blogs ago, I was also digging around my Mac for that R2 sticker template.  I dragged it into Adobe Illustrator and started creating stickers for a Tatooine R2 and a Dagobah R2.  I aimed to create dirt stains that matched the style of the original designs, using splatter halftone overlays.  You’ll notice that I also added a restraining bolt to the Tatooine R2-D2.

I promised you a surprise at the end!  To celebrate my 40th birthday, here is THE FIRST CUSTOM FIGURE I EVER CREATED.  You’re looking at my very first R2-D2 figure.  He lost his sticker after countless hours of playtime in the dirt, the sandbox, and even the bathtub.  I used my mom’s black and blue Marks-a-lot permanent markers to “fix” him, which were like today’s Sharpie markers, but fatter.  You’re looking at the beginning of my all-time favorite hobby. 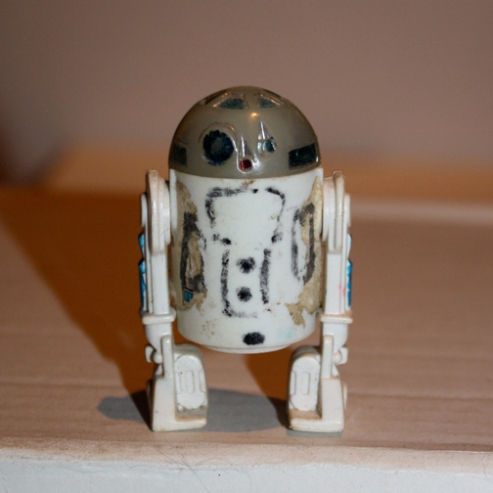