I was four or five when Star Wars came out.  I’ll never forget those first few iconic waves.  But even as a kid, I knew they missed a few important ones.  The good guys had Obi-Wan… where was the bad guy’s old guy?  The “Creature Cantina” was filled with aliens.  Why did we only get four?

The vintage bug bit me recently.  I started filling holes in my collection.  That includes a few custom figures of characters that I thought deserved one thirty-something years ago.  I’ve been customizing modern-style Star Wars figures for years, with far more sophisticated sculpts and paint applications.  In a way, making customs that blended into a display of vintage figures was going to be even more of a challenge.  I had to work with a limited palette, with no shading or washes.  I had to aim for a simpler, minimalist look.  I had to show restraint.  For that authentic 1978 vintage figure look, if I thought it needed a little something extra, it probably didn’t.

Governor Tarkin
A couple of years ago, I made my first attempt at a Governor Tarkin custom figure.  I used the obvious base; an Imperial Officer figure.  I even used the same head, whittling the hat off and sculpting on his slicked-back hair.  I was satisfied at the time, but had since rethought my recipe.  The Imperial Officer figure had come out after Empire Strikes Back, and their sculpts had already become more advanced by then.  I believe Tarkin should have been released with that first wave of 12 figures.  Tarkin should have been number 13.  That’s why I decided to try again, but this time I’d use the Death Squad Commander figure from the first wave.  For Tarkin’s head, I used a modern Tarkin head, but I repainted him simpler with no shading and beady black eyes.  I went back and forth over the hair color, asking myself “what would Kenner do?”  Kenner’s design team would have thought of Tarkin as the bad guy’s old guy; the anti-Obi-Wan.  And let’s be honest, Kenner never paid too much attention to reference photos, or tried all that hard to color-match.  I believe they would have gone with white hair instead of a more accurate grey.

The Death Squad Commander wore gloves, so I swapped those arms with the Imperial Officer ‘s arms from my first Tarkin custom.  There was something funky going on with the articulation, causing the arms to stick out a little too much like he was playing airplane.  I switched the arms back, and instead cut them off at the elbows, hiding the slices in the wrinkles of the sleeves.  I had to do a little whittling and sanding to make them line up perfectly. 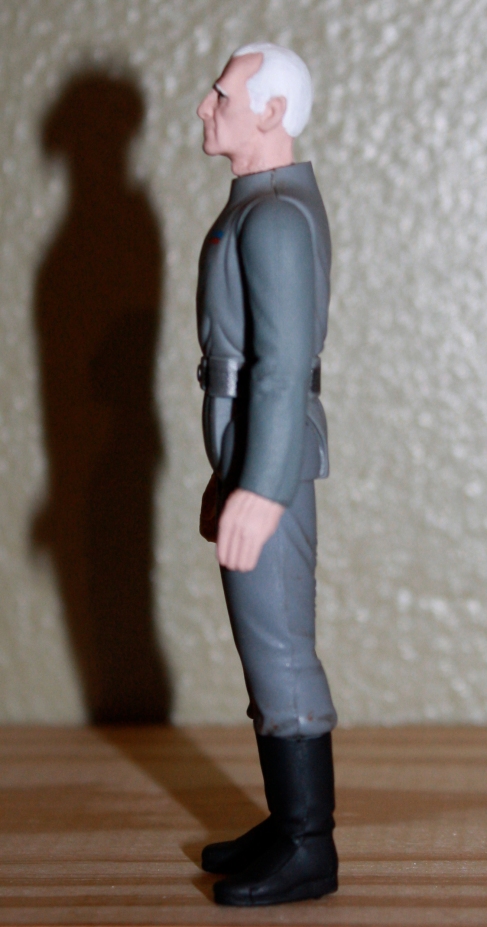 Mothface
This was always my favorite Cantina alien that never had a figure.  I always thought if they had made one more, he would have been it.  This custom was made from a vintage Chewbacca figure.  He was going green-limbed (You collectors know what I’m talking about) so I didn’t mind carving him up.  I whittled off the bandolier and pouch.  Then I sculpted new fur over it.  I sculpted the belly, and then the head.  I painted him solid white.  I resisted the urge to give him grey accents.  I think he blends in with the vintage figures just fine. 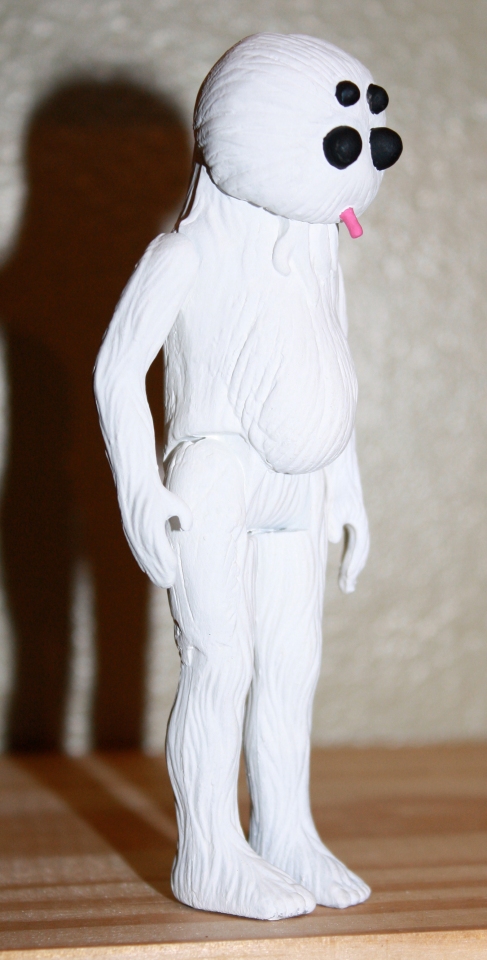 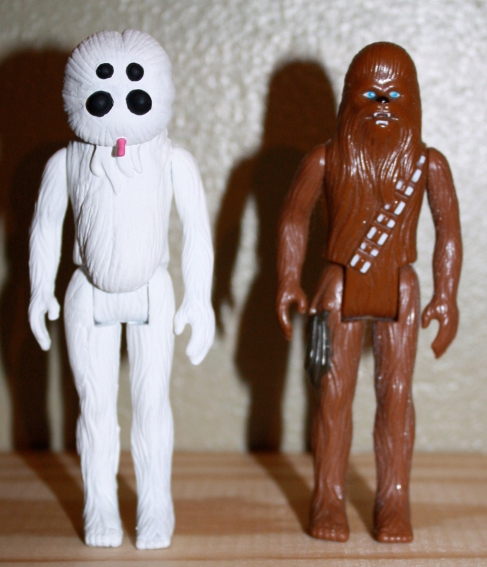 Tangle-Eye
There were only two Cantina aliens with lines; Greedo, and this guy.  Walrus Man’s pal.  These two bullied Luke, and got the business end of Obi-Wan’s lightsaber as a result.  Tangle-Eye and Walrus Man were the anti-Han and Chewie!  So why didn’t he get a figure?

To make this custom, I used a vintage Han body, and the second modern Dr. Evazan’s head.  (Yeah, I know their real names.  I’ll get to that later.)  While I had originally planned to go with the more vibrant, day-glo colors Kenner introduced into the line with the Cantina wave, I decided to go against what I thought “Kenner would do” and stick with wave 1’s palette.  I painted his vest in Kenobi/Jawa reddish brown.  His shirt is Sand People tan.  His pants are Death Squad Commander grey.  All the eyes were simple, black and beady back then, but I painted his blind eye white with a hot pink outline to imply scarring.  I painted in his exaggerated mutant nostrils for emphasis. 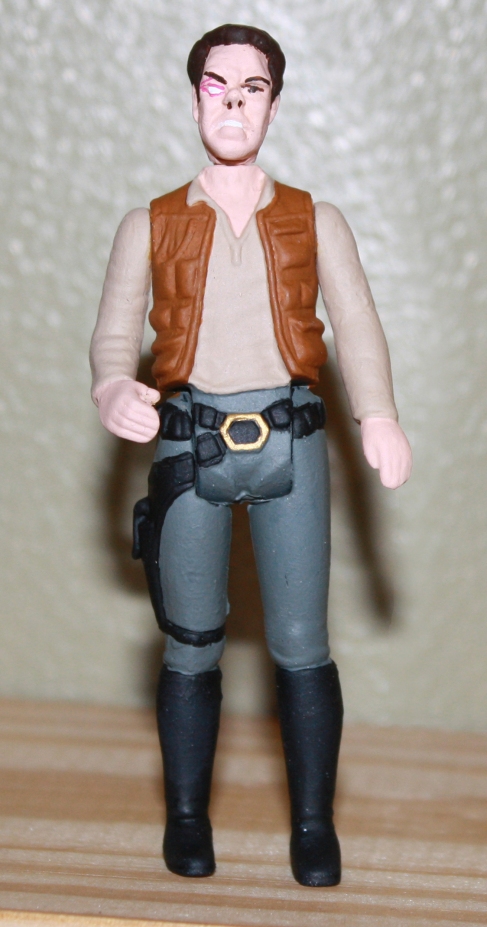 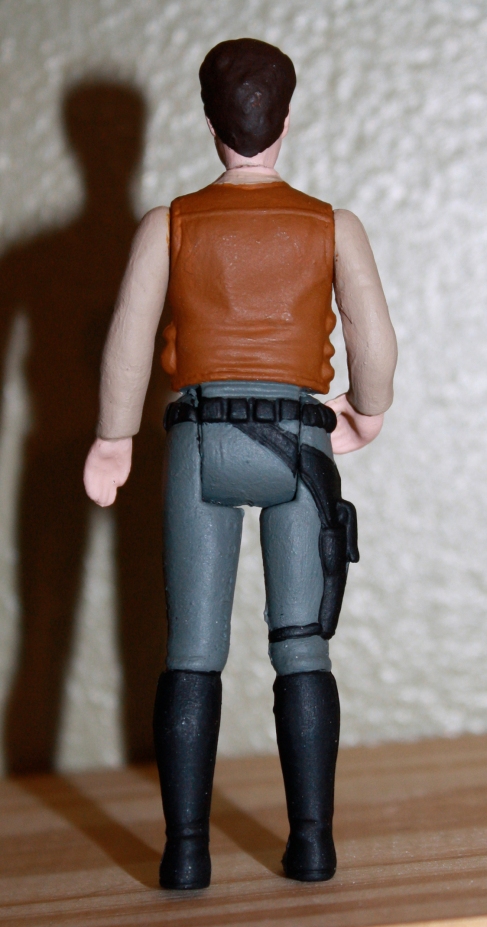 Epilogue: Vintage names
Yes, I know these characters are known as Grand Moff Tarkin, Muftak, and Dr. Evazan.  But that came from other sources like the role playing game and customizable card game.  Hell, the first time I ever heard “Grand Moff Tarkin” was on the side of a Star Wars dixie cup.  Leia addressed him as Governor Tarkin in the movie, and I think that’s what Kenner would have named him, too.

As for the aliens, well, Kenner liked giving them silly names that kids could easily remember because they poked fun at their most obvious traits.  Greedo was exempt because he had the distinction of having his name spoken out loud in the movie.  The rest of the aliens got names like Snaggletooth, Walrus Man, and Hammerhead.  I decided to give these two guys vintage-style names.  Muftak is now known as Mothface!  Dr. Evazan’s vintage name will be Tangle-Eye!

Let me tell you about Tangle-Eye.  When my grandpaw was young, he had a one-eyed friend named Tangle-Eye.  You see, in the old days, that’s how it was done.  You were thankful for what you had, arguments were settled with fists, and nicknames were meant to showcase your greatest weakness or shame.  And they were given to you by your closest friends.  And you went by this nickname like you didn’t give a damn. 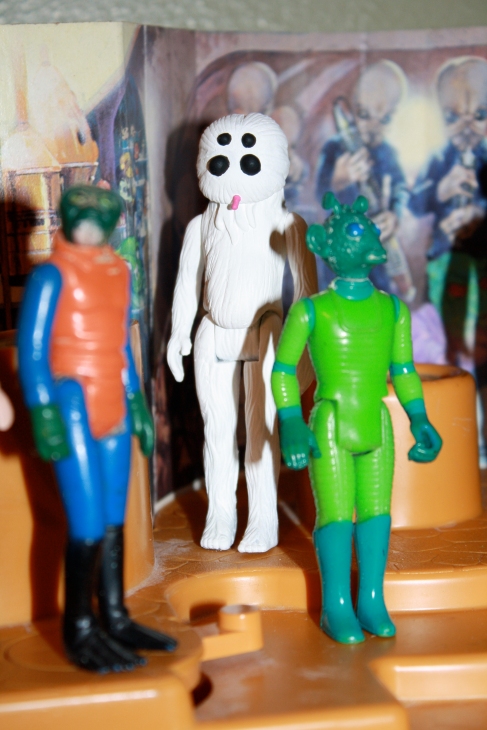 And here’s a work-in-progress photo… 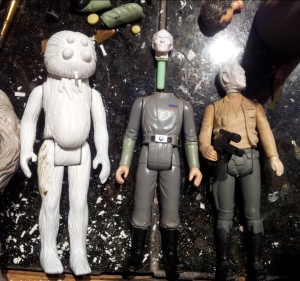 One response to “Flashback Friday: Vintage Star Wars Figures that Should’ve Been”