DC Entertainment just announced new product lines for long-time fans: figures based of the hit Nineties animated shows: Batman The Animated Series and Batman: The New Adventures. The figures will be 6″ in scale and retail at comic book stores for at least $25.

This is not the first time we’ve seen figures based on these properties: in the Ninties, KENNER made 3″ figures as well. They were pretty amazing- almost all of the figures from the Batman Animated Series had a figure, and I think they ran for under 10 bucks. Several years later, when the New Adventures featured all-new character designs, KENNER did a good deal of toys based on that show as well, but the demand had died off (or the moms were scared off, as the re-designs were singularly …darker in tone). Many classic characters were not made in the sleek design, including one of my favorites: Poison Ivy

Poison Ivy started out as a bottanist who developed plant-based weapons to strike out against the killers of plant life: Mankind. Then, in the re-designed series, Poison Ivy … did… something to herself.

I love the re-design of her look: the black and dark reds and greens. I found a Ivy head available on the net and used a JLU female figure as the body. 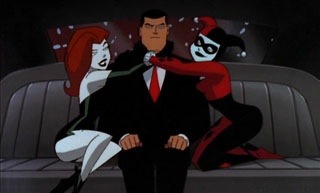 SO, my word of caution to you new enthusiasts of the animated figures: at $25 a pop, you are either flat broke if they make every figure KENNER made, or you’re peeved because they skipped out on Ivy. 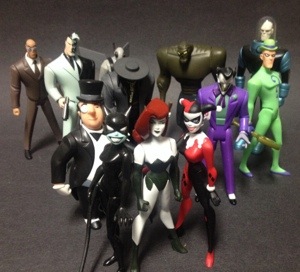 I’ll stick with what I got.