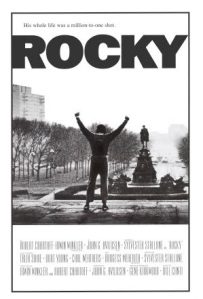 It’s one of my favorite films of all-time.  A fantastic story of a nobody, down on his luck, who turns that all around in a million to one shot.  Add to that Stallone even getting the film made, particularly with himself in the lead, was it’s own challenge.  I really  just love the whole package.
So one night while watching it I had a crisis of conscience: Why wasn’t Rocky on my shelf anymore?  Hot Toys had a couple versions of Balboa with one being from Rocky III and the other from from Rocky IV.  At one point I owned the latter, but I really wanted the true underdog of the spirit of the character.  The struggle.  The determination.  I wanted something that embodied the symbolism of the training scene in which he charges up the steps conquering each one along the way. So I decided to make just that.
It started with a relief cast made from a Hot Toys Rambo head. Hot Toys being known far and wide for their uncanny likenesses there was no better place to start.  Of course it helped that I already had that head for a Rambo custom. 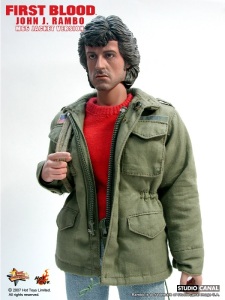 From there the cast was grafted onto another sculpt. One with ears. The hair and hat were sculpted from there. 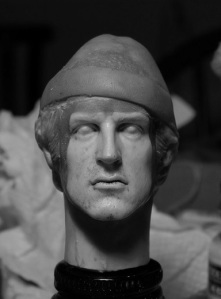 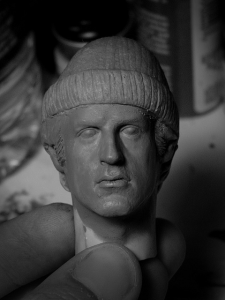 The rest is pretty basic kitbashing. Some of of it came from the parts tub. Some of it, such as the Converse, I picked up off ebay.   The body was built up with epoxy to accommodate Stallone’s proportions in the film.  I just kept adding to it until everything hummed. 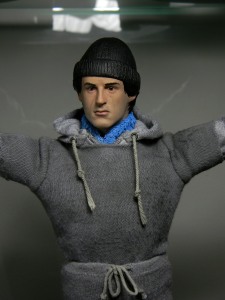 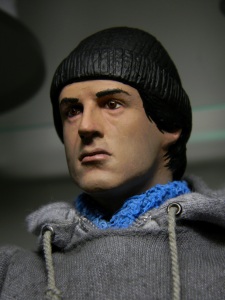 And lastly the stand was done using the base from the more recent Batman figure. 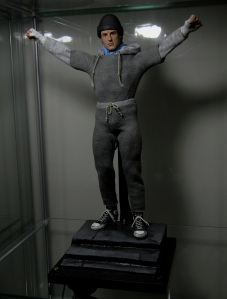 One response to “Underdogs ‘R Us”