Released in 1976, my dad got this for Christmas from his sister. It may have been that year; seems about right, before her family started moving around the country, taking the cousins I was closest to, the nearest I would have to sisters for years, farther and farther away. I was 9, almost ten that Christmas. It was the only time I remember music as a gift in that household, and it seemed so strange, because our house was usually full of music—radio or albums playing all the time. Mom had a cousin with the means to record 8-tracks, and on one visit to his place we became the happy owners of a goldmine of stuff, a mixtape of Elvis, hits of the day, country…

But why was Dad’s side never into sharing music? My grandmother on that side played piano, organ and accordion and gave lessons. All the boys played in marching bands, my youngest aunt sings and taught voice, leads church choirs, plays guitar, piano, autoharp, recorder, I don’t know what all. But…music didn’t show up as a commodity.

And Dad, as far as I remember, never listened to the album. Not once. 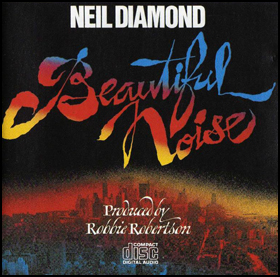 To a pre-teen with lots of grown-up questions, no siblings or older friends to ask, the disc was like a guidebook to how adult relationships worked.

Oh yeah, what was the album?

Fans consider this one of his best, and if that sounds like faint praise to you, what can I say? The guy had a long string of hits before and after it, and I became a bigger fan after hearing this one. (I know Song Sung Blue was on that mix 8-track.) It wasn’t until he started to hang with increasingly soft artists like Carole Bayer Sager that I gave up, and now he’s working with musical Rasputin Rick Rubin.

But this album, that helped make me who I am? Just side 1, believe me. I’ve tried to dig side 2 for years, and I grudgingly gradually admitted that some of it is not too bad, but side 1…

Leads with the title track, which is always a plus to me. Kind of like the literary method of introducing your theme. This is about finding the beauty in the noise of the city, and a New York boy like Neil can do it effortlessly, but he can also write a song explaining that beauty to others, even the most Midwestern of us, like Indiana-bound me. Then ‘Stargazer,’ about a daydreamer who doesn’t take his cares seriously. May be a little autobiographical, but it spoke to me again, like all the songs here would in some way. The production is clear and transparent and the tune is gently joyous, continuing the lift from the first cut.

Then things turn darker. ‘Lady-Oh,’ an honest-to-adolescence love song about the worst kind of love, unrequited. Here is a guy with a deep, seductive voice, big-city good looks, and world experience walking alone and crying his heart out because he never told this girl (no, woman…no, lady) how he felt. This was the first time I thought to myself ‘This guy knows more than I do about something, and I could learn from him.’

Then, it’s back up again with ‘Don’t Think..Feel,’ another happy number, My First Reggae, and an exhortation to let things happen and not worry about the consequences. Coupled with ‘Lady-Oh,’ it sounded like a blueprint: don’t overthink your actions. If you feel like doing something, do it. Should have learned my lesson better, because the late 70s and 80s were the last time most of us could get away with anything like that. Follow that with ‘Surviving the Life,’ another upbeat lesson on living from a guy who had done some to a very young guy who hadn’t yet. Gentle warnings that things might not always go your way but so what, you had no real choice; take what comes and make the best of it or lie down and cry, and no one gets to lie down and cry.

Then, the piece de resistance: ‘If You Know What I Mean.’ Much later, when I would start analyzing music for my own amusement and others’ torture, I would realize that one of the things I like best about music is its ability to function as literature, conveying history, criticism, advice. Only a few do it really well. To me, they include Buddy Holly, Lou Reed, Sam Cooke, and this guy.

I won’t break this one down any further; I hope I’ve convinced you to check it out yourself if you aren’t familiar. You may at least see where I get some of my tastes and quirks, and if not you’ll have another reason to shake your head and question my judgment.