In our Hallowe’en perusal of the Archetypes of Evil, we’ve so far met the Megalomaniac and the Crook.  Next up?  The crazy-as-bug-fuck-lunatic.

In the I-don’t-know-what-they-were-thinking Department, DC Comics decided that The Atom, a super hero who could shrink down to be a tiny super hero, should have a Arch-Nemesis that was…

To fight a wee man.

I can get it: To a wee little man, a big bad plant looks… big, but THE ATOM COULD CHANGE BACK TO NORMAL SIZE.

And you wonder why DC isn’t killing at the box-office?

Eventually, someone figured out just how lame this was and decided to have Dr. Woodrue perform some mad scientist-botany experiment on himself.

Now, the former Dr. Woodrue is a plant.  He makes plants grow and mutate.  All plants.  It turns out he has a high opinion of plants and some thoughts about how he would like to see things change a bit. 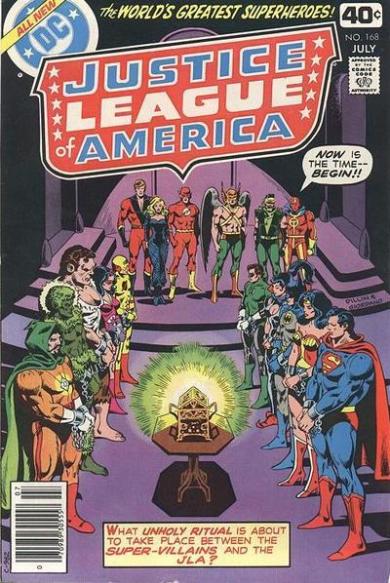 So, he’s clearly on the Villainy team.  He’s one of the most powerful beings on the planet, and he’s got his own agenda.  He looks kinda like how a human should look.  Kinda.  For now.  But those thoughts are decaying and new things are growing…  In the end, his teammates are just more meat to be cleansed.

And that’s the Lunatic.

COLLECT ALL FIVE IN THE SERIES!

Evil Powers: Control of all vegetation.

Secret History: Do yourself a Hallowe’en treat and read SAGA OF THE SWAMP THING vol 1.  The Floronic Man is a chilling lunatic bent on the eradication of all meat on earth.  Things get ugly fast.

6 responses to “The Secret Ingredient is… Villainy WEEK III”